Trip from Geneva to Montreux, Switzerland

Famous for its internationally acclaimed Jazz Festival, Montreux is a small Swiss town on the banks of Lac Léman (Lake Geneva) facing the spectacular Dents-du-Midi mountains that rise on the far side of the lake. For most of the year this wealthy enclave has a sleepy olde-worlde atmosphere, but it wakes up with a bang in July every year, when world-class musicians from every category of modern music come to play for two weeks. Jazz does, of course, feature on the festival's musical menu, but is no longer the only dish. If you miss being in Montreux when the festival is on, there are some other attractions you won't want to miss.

Make the most of the scenery by following the pedestrian walkway along the lakeside, which enables members of the public to traverse much of the town while enjoying the lake view. Most unusually for Switzerland, you can find palm trees growing here, thanks to a mild micro-climate.

Chillon Castle
Stop for ice cream or afternoon tea and pastries at one of the grand hotels, or better still, at the renowned Confiserie Zurcher – a landmark since 1879. A short bus-ride from the town itself is the famous Château de Chillon, a striking 13th century castle and fortress on a rocky island in the lake. The Château, which has inspired writers and poets down through the ages, is open all year round, and guided tours are available. In fact, the Montreux Riviera has a long history of celebrity residents and visitors, from "stars" like Lord Byron and Freddy Mercury (who spent a lot of time in Montreaux writing and recording his albums) to the more discreet crowned heads of Europe. 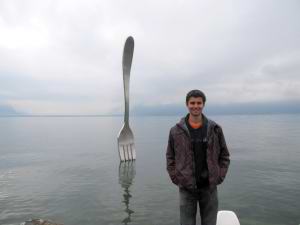 Behind Montreux, the ground rises steeply for several kilometres, culminating at Les Rochers-de-Naye (2,042 metres or 6,700 feet above sea level). From here, on a clear day, you see as far as Geneva, at the other end of Lac Léman. Fans of mountain hiking can take pedestrian trails to the top, but most choose to do such a steep journey via the famous cog railway, which affords you astonishing views as it moves almost vertically uphill from the centre of Montreux town. Trains leave once per hour from an annexe to the main train station, and the entire journey only takes 55 minutes, with brief stops at tiny hamlets clinging improbably to the steep mountainside.

Whether by car or by train, the scenery you pass through on the stretch between Lausanne and Montreux itself is nothing less than breathtaking: steeply terraced vineyards down to the lakeside, the blue water of the lake itself, and rising from the far shore, the mountains of the Chablais Alps. This stretch is called the Lavaux region and is now a UNESCO world heritage site.

Train Geneva to Montreux
Travel time is about one hour. There are usually two trains per hour leaving Geneva; no need to book seats in advance, but do buy a ticket before boarding the train.

Driving Geneva to Montreux by Car
The distance from Geneva by car (take the A1 and A9 autoroutes (i.e. highways) is 59 miles (95 km), and depending on the traffic, the drive could take slightly less time than the train ... or a lot longer!

Long famous for its wealthy and aristocratic visitors, Montreux has a high proportion of luxurious hotels, like the 5-star Fairmont Montreux Palace and the Royal Plaza. There are several 4-stars and 3-stars as well, but a more limited selection of moderately priced ones. However, you can also try the nearby town of Vevey – worth a visit itself, and with more interesting shopping opportunities – which has an excellent rail connection to Montreux.

Search Hotels in Montreux via Booking.com

Book or check availability of any hotel in Montreux by entering dates.
You will be redirected to Booking.com, where you can also make online reservation.