Parks
Geneva is one of the greenest cities in Europe with more than 20 parks in the city center offering countless opportunities for rest and relaxation. Many people are resting, relaxing, eating, playing or just chilling outside on the grass in a parks, especially in summer.

Top 10 Sights
The most popular sights and attractions You should not miss when coming to Geneva as a tourist.

The Jet D’eau is certainly an iconic image that is conjured up in many people’s minds when they think of Geneva. This water fountain is the tallest in the world at approximately 140 metres and was originally installed, not for its aesthetics, but as a safety valve for a local hydraulic water network, yet nowadays it is a popular attraction for many people. 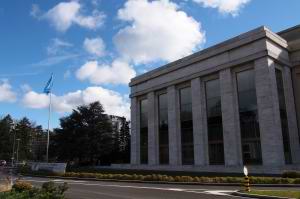 Admission: ID PAPERS ARE REQUIRED TO ENTER THE BUILDING

No trip to Geneva is complete without a visit to the European Headquarters of the United Nations. The sprawling complex is accessible only via guided tour, offering unique insight into the inner workings of the world's most important international body. Highlights include the 2000 seat Assembly Hall and the Council Chamber decorated with gold murals depicting the human struggle for peace.

Geneva's world famous lakefront is the centerpiece of the city and offers endless opportunities for recreation and relaxation throughout the year. The Jet d’Eau spouting 140 meters into the air is the world's tallest and symbolizes Geneva's heritage as a leader in the field of hydraulic power. The Promenades along the left and right banks of the lake are filled with cafés, parks, street markets and other diversions from lake cruises to amusement rides to water skiing. The Bains des Paquis on the western shore has been a crowd favorite since its opening in 1932 and continues to draw visitors and locals alike who flock to its saunas and unique bathing areas to see and be seen along this sunny concrete jetty. Dominating the eastern bank, the giant Flower Clock in the English Garden is a tribute to Geneva's watch industry, harmonizing Swiss ingenuity with the floral bounties of nature. The dial is composed of some 6,500 flowers and is updated with new arrangements several times per year.

Rousseau Island
Location: Pont des Bergues
This romantic island named for the Genevan philosopher Jean-Jacques Rousseau is a bastion of serenity amidst the turbulent waters of Le Rhone River. The island contains a bird sanctuary and a restaurant with stunning views of the surrounding cityscape.

Saint Peter's Cathedral
Location: Cour Saint-Pierre
Hours: 09:30-18:30 Mon-Sat, 12:30-18:30 Sundays (June – Sept); 10:00-12:00, 14:00-17:00 Mon-Fri, 10:00-17:30 Saturdays, 12:00-17:30 Sundays (Oct – May)
Admission for Cathedral: free
Admission for tower: SFr. 3.00. Children under 12: SFr. 1.50.
Towering over the Old Town in the heart of the city, Saint Peter's Cathedral is Geneva's oldest and most impressive architectural treasure. The Cathedral was began in 1160 and took over 400 years to complete, suffering numerous makeovers and fires throughout the years. The north tower offers incredible panoramic views of the city, while the basement houses an Archaeological Museum chronicling the excavation of artifacts found beneath the Cathedral, some dating back as far as 350 AD.

The Old Town
Geneva's ancient Old Town is a maze of sloping cobblestone streets and alleyways filled with cafes, boutiques and historical landmarks at every turn. A former Roman marketplace, the Bourg-de-Four is the oldest public square in Geneva and remains a hub of activity surrounded by bistros, terraces, bars and other popular meeting spots. The 15th century Hotel De Ville located along Rue de l'Hotel-de-Ville still serves as the seat of government in Geneva and is the site of many political milestones including the first convening of the Geneva Convention in 1864 and the founding of the League of Nations in 1920. Across the street, the Old Arsenal is a former battery, now home to a 1949 mosaic by Alexandre Cingria depicting Caesar's arrival in the city 58 BC. Finally, The Treille Promenade on the south side of the Old Town was once an artillery post and today offers beautiful views of the city from atop the towns last remaining rampart wall.

Russian Church
Location: Rue Toepffer
The unexpected Russian Church pierces the skies near the old town with its flaming gilded cupolas and golden spires, offering a unique contrast to the predominantly French and medieval architecture which dominates the rest of the city. The church was completed in 1866 by Russian expatriates living in Geneva with funding from the sister-in-law to Tsar Alexander 1 st. The Byzantine styled exterior and opulent interior, filled with orthodox icons, is an inspiring treat. 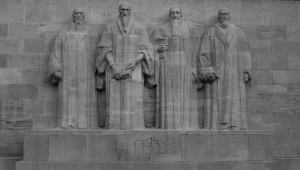 Located in beautiful Bastions Park, this monument commemorates the major events and figures of the Protestant Reformation. Larger than life statues of Guillaume Farel, Jean Calvin, Théodore de Bèze and John Knox dominate the central part of the 100 meter wall, eternally guarding over their “City of Refuge.”

Place Neuve
Bounded by the Conservatory of Music, the Grand Opera Theater, the Rath Museum and the nearby Victory Concert Hall, the square at Place de Neuve represents the pinnacle of high culture in Geneva. A statue of the Swiss General Henri Dufour sits in the center of the square adding to the air of sophistication which permeates the plaza. High class cafes and restaurants are also on hand to cater to the theater crowds.

Junction of rivers Rhone and Arve
Beautiful place with unique view of two rivers of different colors merging in each other.

Plainpalais Cemetery
Location: Rue Des Rois
A peaceful oasis in the center of the city, the Plainpalais Cemetery is the final resting place of many of Geneva's most prominent citizens including John Calvin, James Fazy, Augustin de Candolle, Henri Dufour, and Sergio Vieira de Mello, the late UN High Commissioner for Human Rights. The cemetery is filled with interesting gravestones dating back to 1482.

Location: 23-29 Rue Louis-Favre
Named after the French word for the “Smurfs,” the Schtrumpfs is a modern architectural landmark located in the funky Les Grottes neighborhood behind the train station. The apartment complex was designed by three architects determined to create the most unconventional building possible. The result is a Gaudi-esque amalgamation of colors and styles that has to be seen to be believed.

The Paquis
Despite its reputation as Geneva's unofficial red light district, the Paquis, located in the heart of the right bank, is actually Geneva's most diverse and colorful neighborhood. The area is filled with authentic ethnic restaurants and numerous interesting shops, bars and nightclubs.

Carouge
Just over L'Arve River, the neighboring town of Carouge is a Mediterranean style hamlet modeled after the city of Nice in France. The former trading town is today commonly referred to as the ‘Greenwich Village of Geneva’ for its many boutiques and studios where artisans and craftsmen of every ilk can be observed plying their trade. The bohemian vibe carries on into the night in Carouges’ many jazz and night clubs. 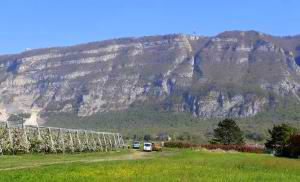 Location: Etrembieres, France
Hours: 09:30 – 19:00 (April to October)
Cable car ticket: €7.30 eur, Children: €5.30 (one way)
Looking over the city like a big brother, Mount Saleve sits in Geneva’s backyard just 5km from the city center. A cable car offers quick access to the peak 1,380 meters above sea level, where breathtaking views of the Alps to the west and the Jura mountains to the east await. Day trippers can enjoy a bird’s eye view of the city from a mountain top cafe or head off on one of the many trails criss-crossing the mountain to find their own slice of heaven.